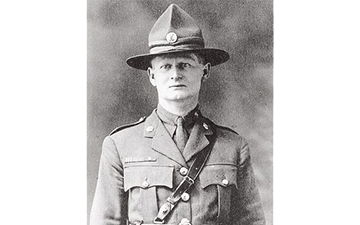 We can claim Reginald Stanley Judson VC, DCM, MM, JP as one of our own.

100 years ago, exactly, Judson (Auckland Infantry Regiment) was the talk of the nation, a hero on the battlefields of France during World War One. His fame – three gallant acts at the front.

In late July 1918 Sergeant Judson led an attack against enemy positions including a machine-gun post at Hebuterne, which, when silenced, enabled 6 of his colleagues to be rescued from the Germans. For this he was awarded the Distinguished Conduct Medal.

Within weeks Judson led a daring bayonet charge during a drive against the enemy at Bucquoy, taking out a machine-gun post. His actions resulted in the award of the Military Medal.

Then, during the second Battle of Bapaume, Reginald Judson, under heavy fire, led a small bombing party which captured enemy machine-gun positions. This done, he alone cleared out more of the enemy by proceeding along the trench, bombing the machine-gun crews, thus saving his men and enabling the advance to continue unopposed. His actions were later described as “conspicuous bravery and devotion to duty” and he was awarded the Victoria Cross.

In the course of about a month Judson had been decorated three times, including the supreme award for valour, a remarkable record.

He returned to Auckland a war hero. At a civic reception Judson struck just the right note when, in response to a toast, he said the medals were not his “…but belonged to Auckland Regiment, those fellows with me during the push”. His remarks received an ovation.

Remarkably, Reginald Judson enlisted for service in World War Two (determined, he lied about his age so he could sign-up) and he served on the home-front organising a section of local defences. He rose to the rank of Major. After the war he farmed in Northland, later returning to Auckland where he served as Auckland City Councillor for 9 years and member of the Auckland Metropolitan Fire Board, as well as continuing duties as a Justice of the Peace. He died in August 1972.