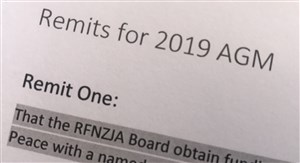 Future policy and the way Justices of the Peace go about their duties is often shaped by Remits to the Royal Federation of N.Z. Justices Associations’ Annual Conferences.

Auckland Association asked delegates at the Conference just ended in Blenheim to agree with four remits it had submitted.

Stamps for new Justices: The first asks the federation to obtain funding from the Ministry of Justice to enable new Justices of the Peace to be provided with a personally-named rubber stamp for certifying copies. It’s thought the cost would be about $7,000 annually, given the average number of Justices sworn.

Shortening Processes: The second sought a review with the Ministry of Justice of the time-frame it takes to appoint Justices because, as the rationale put it “there are too many delays in the process… we often have provisionally appointed Justices waiting more than 6 months before being sworn”.

Removal/Suspension: The third remit suggested guidelines be developed with the Ministry of Justice around implementation of that part in the Justices of the Peace Act which provides for removal or suspension from office of those neglecting or refusing to perform duties.

Justice Education in Schools: The remit that was lost asked for the Royal Federation to explore the possibility of introducing Justice Education Programmes in schools. While Auckland said this is included in studies in other countries and is a gap in New Zealand: other delegates believe it is taught and that the curriculum is already full to overflowing without adding other studies.

On-Line Training: A remit from the Far North Association seeking consideration to provide on-line training for Justices was passed.

Justice’s Records: Marlborough Association’s remit was lost… it suggested exploration of a programme which would allow Justices to maintain their records of ministerial activities, with security, on the Royal Federation’s website. Delegates thought most Justices prefer to keep their own personal records of the clients they see.