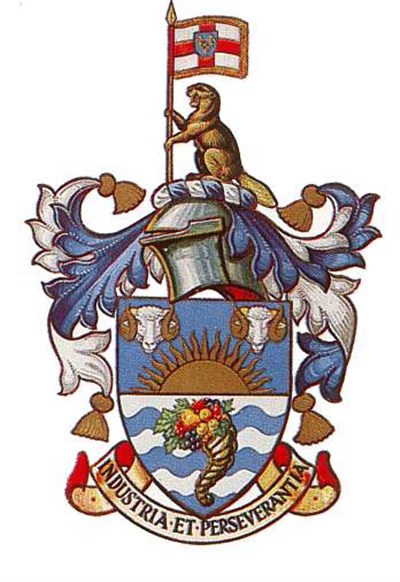 Whose Coat of Arms with a Beaver waving the flag?  Answer below.

+ Conference sessions, associated business and social events were very well organised by the Host Association: Marlborough. Board Members and Delegates could not help but be impressed with the chosen meeting venues, including the ASB Theatre complex. 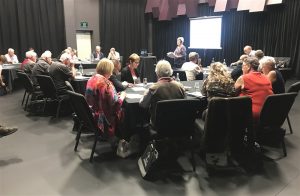 The complex’s brand-new Anderson Theatre auditorium was used for the very first time when Royal Federation President, Rachael O’Grady, held her meeting there with Presidents of the 28 Associations that make up the Federation.

+ Members of the Marlborough Brass Band rose to new heights during the Conference’s Opening Ceremony. At the end of formalities, the octet unexpectedly arrived in the auditorium on the lift, a wall-to-wall platform that rises  from the depths where the orchestra pit usually is, right in front of the stage.  The group, from the award-winning band, gave a bracket of well-known, contemporary items to rapturous applause.  After which they disappeared on the lift down into the bowels of the theatre, playing as they descended!

+ Garry Nicholls has taken over as Auckland Regional Representative and has already attended his first Royal Federation Board meeting. 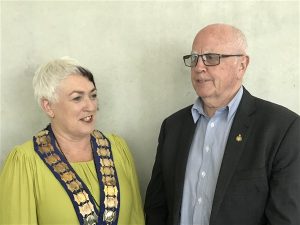 Garry is a former President of the Auckland Association, a Judicial Justice of the Peace and is Chairman of the Association’s Registry and Finance Committee.

+ The Coat of Arms in the Marlborough District Council Chambers could be from a sister city in Canada… it is surmounted by a beaver. The Mayor’s welcome to Federation Board Members and Officers was held in the Chamber. 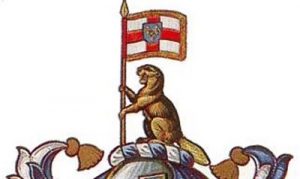 The Beaver atop the Coat of Arms

But the crest is, in fact, Blenheim’s own, now given over to Marlborough. The beaver?  It alludes to a nickname because Blenheim was flood-prone. In about 1850 a Canadian adventurer arrived in the town on horseback to meet a couple of his friends, and found the place flooded. But his mates were safe and dry, sheltering from the water on the top bunk of a hut, “like beavers in a dam”, he said, and the name stuck: the town sometimes known as Beaver Town or Beaverton.