AUCKLAND JUSTICES OF THE PEACE ASSOCIATION 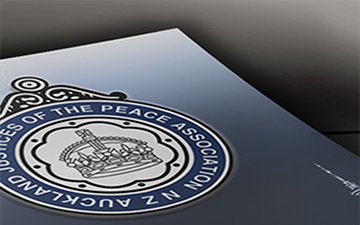 The Council of the Auckland Justices of the Peace Association held its regular monthly meeting this week.

+ The Council has a rolling programme to review and update its policies and at this month’s meeting members agreed how this review programme will be managed and also approved the policy surrounding the Association’s Facebook page.

+ Auckland’s Registrar, Janet Thompson, has been asked to talk at Royal Federation’s upcoming Conference on the topic of establishing and maintaining a presence on Facebook, reflecting her successful launch of Auckland Association’s pages on Facebook. Her presentation at Conference may prompt other Associations to start their own pages.

+ Members were shown one of the new pull-up banners to be offered to Service Desks. Designed to be set up indoors, the sign points out that the Justice of the Peace service is under the auspices of the Association and lists helpful hints for clients before they see the Justice. The banners have been financed as part of the Lotto grant.

+ Support Group Coordinators will be gathering on Saturday 23rd for their annual meeting. After business is completed the pull-up banners will be distributed.

+ More than 400 vouchers for rubber stamps are being distributed to Service Groups, to be passed on to their busiest local Justices who work at Service Desks, etc. The voucher, with a value of $75, can be used by individuals to purchase rubber stamps, either to replace worn out ones or to add a new one, for instance the stamp certifying a copy when the Justice has sighted the original on-line. The vouchers expire at the end of March. This offer is also funded thanks to the Lotto grant.

+The stage is set for Annual Conference of the Royal Federation of Justices Association at the end of the month in Blenheim. Council has fine-tuned presentation of its own Remits and decided how it will vote on others.

+ The next swearing-in ceremony will be held in the Auckland District Court on Monday (18th) when 7 new Justices of the Peace will take the Oath.

+ There’s to be a special sitting in the Auckland District Court on March 6th to acknowledge the retirement from the Bench of 6 Judicial Justices of the Peace: Gill Court, Earle Mead, Mark Sinclair, Angela Siu, Allan Spence and Eddie Stark. Opportunity will also be taken during the ceremony to recognise the service on the Bench of the late Cecil Lochan.

+It was Ric Carlyon’s last Council meeting as Auckland Regional Representative: his term ends early next month at the conclusion of Royal Federation’s Conference. Auckland President Sherryl Wilson thanked Ric for his service and presented a farewell gift. In reply Ric thanked all office-bearers of the various Councils over the 6 years he had been a member, along with all Justices, Registrars and the Treasurer. “It’s a great team”, he said, and went on to list its considerable achievements over the years. Garry Nicholls succeeds Ric as Auckland Regional Representative.