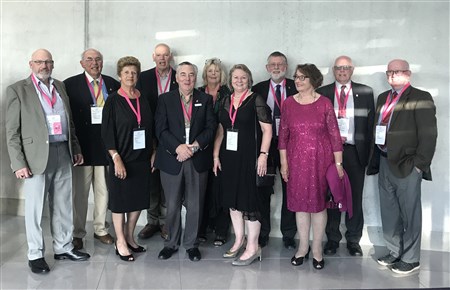 Team Auckland, with apologies about the late afternoon sun!

Notes from this year’s Annual Conference of the  Royal Federation of N.Z. Justices’ Associations held in Blenheim over the weekend.

+ Garry Nicholls was installed as Auckland Regional Representative on the Federation’s Board and he has already attended his first Board meeting, held immediately the Conference concluded yesterday afternoon. He replaces Ric Carlyon who, during the closing stages of Conference, was thanked for his services while on the Board.

+ Auckland Registrar Janet Thompson, in a Plenary Session, explained how Auckland Association established its successful Facebook page: the mechanics, security considerations, rules about content and the need to keep it up to date. If the interest in Janet’s presentation is anything to go by, other Associations will soon be getting up their own Facebook pages. Royal Federation has already decided it will have its own pages.

+ As mentioned elsewhere in News, three of Auckland’s remits found favour, one did not.

+ Reporting  on the remits that Auckland put up last year and which were agreed-to: