In 2022 the Auckland Justices of the Peace Association Inc will celebrate its Centenary following on from the Canterbury Association (2018) and Wellington (2020).

Taranaki and Wanganui Associations will also celebrate their centennial year in 2022.

A subcommittee of the AJPA Council has been working and preparing for this momentous year for the past eighteen months and are excited to share with you some of the planned features.  A special logo has been designed to honour this year and will be used throughout 2022.

The Regional Conference in September will be an opportunity for all members to participate as well as attend the Centenary Celebration Dinner at the Royal New Zealand Yacht Squadron on 15 October, the month the Association was formed.

A Centennial Book is being compiled and will be available to all members.

Past AJPA Council Member and former RF Board Member, Ric Carlyon has been researching and writing up some of the “historical highlights” and the first of these appears below; be sure to follow these regularly.

Reasons behind the Founding of the Association in 1922…

Justices of the Peace had for years been plagued by a denigrating campaign by the weekly newspaper “Truth” which cruelly called them “Jay Pays” or “Jay Pees”, taking many hundreds of column inches over the decades to call out injustices, mistakes, harsh (or short) sentencing, and uneven tempers on the bench. And then in early 1922, there was a well-publicised case of a Justice of the Peace who gave a stiff jail sentence for a trivial offence. How could Justices counteract this bad publicity? Other centres had formed their own Associations, notably Wellington, mentored by Court Clerk, Cecil Hewlett. 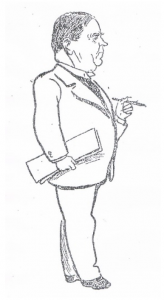 His transfer to Auckland Court, befriending Justices here, immediately sowed the seeds for a local Association, which as in other centres, would educate Justices enabling them to better carry out their duties, especially on the Bench. The Auckland District Justices of the Peace Association was formed on 25th October 1922 and, like others in Wellington and Christchurch, it organised training and the issue of a Handbook which resulted in notably improved competencies… evidenced just a few years later when there were no further sardonic references to “Jay Pays” in “Truth”.