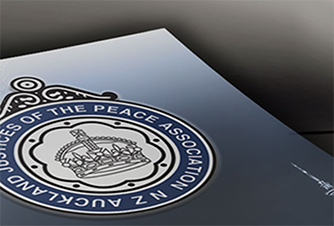 The Registrar Janet Thompson, in accordance with our Association’s Rules, has advised the Agenda and associated papers for the upcoming Annual General Meeting on Sunday September 30th.

The combined Annual General Meeting and Regional Conference begins at 9.30 at Alexandra Park, and first up is the Opening Speaker, Associate Minister of Justice, Hon. Aupito Sio, MP. Later in proceedings the meeting will be addressed by Distinguished Professor Paul Spoonley, Pro Vice-Chancellor, Massey University whose subject is “A ‘New’ New Zealand Emerges: Implications for Justices of the Peace”.

Two nominations have been received for Auckland Regional Representative on the Board of the Royal Federation of New Zealand Justices Associations: Garry Nicholls and Wallis Walker.

There’s one nomination for the position of President of the Auckland Justices of the Peace Association:  Sherryl Wilson.

No nominations have been received for Vice-President of the Association

There are a 2 remits seeking local action. The first suggests all Ministerial Justices submit annual returns of their activities while a second proposes the Association investigates ways and means to encourage greater participation by all Justices in Ministerial duties.

5 remits will be considered with the view of presenting them at the Royal Federation’s national conference. They range from replacing the title “JP Retired” with “JP Emeritus”, that re-accreditation be for a period of four years, that new Justices be issued with a stamp for certifying copies, a proposal for Justice Education programmes in schools and that the time-frame be reduced for processing/appointing new Justices.